About us
About St. Joseph Pontifical

St. Joseph Pontifical Seminary, Mangalapuzha – a Major Seminary of the Syro-Malabar Catholic Church – is one of the prominent institutions amoung the centres of formation of catholic clergy in Kerala. The seminary had its humble origin in 1764 at Verapoly and was shifted to the present location at Mangalapuzha in 1932. Ever since the inception, the seminary has given birth to thousands of priests amoung whom there are Cardinals, number of bishops, and scores of others who, in different capacities, rendering their service to the people of God in various parts of the world. And the seminary continues to serve the Church, ever adapting itself to the changing needs, with renewed commitment and expertise.

Started by the Carmelite missionaries, the seminary was functioning as an inter-ritual seminary which catered the needs of the three rites – Syro-Malabar, Syro-Malankara and Latin – in Kerala. Raised to the pontifical status in 1964 the seminary was entrusted to the Kerala Catholic Bishop Council (KCBC) by the Holy See. By this time the seminary had two wings: Mangalapuzha seminary giving formation to the theology students and Carmelgiri Seminary forming philosophy students. Later in 1996, as part of the structural re-organisation on the basis of Rites, the Mangalapuzha seminary was handed over to the Oriental Rites and Carmelgiri to the Latin Rite to form clerics in their own respective traditions. Currently, the Mangalapuzha seminary has about 275 seminarians, hailing from various dioceses, undergoing formation.

Conveniently located by the national highway 47 near Alwaye, Mangalapuzha campus is blessed with a pristine environment where lush green trees, sprawling meadows and plentiful vegetation that fashion the atmosphere serene and peaceful. The majestic chapel which is built in gothic architecture and the soil that is sanctified by the tender and holy footsteps of Blessed Frs. Aurelian and Zacharias render it sacred and ethereal and thereby, making it into the most ideal place for formation. 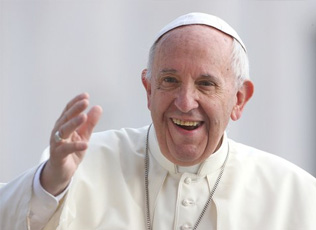 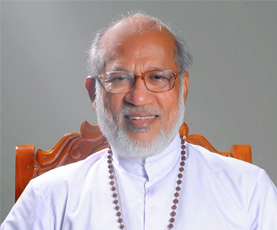 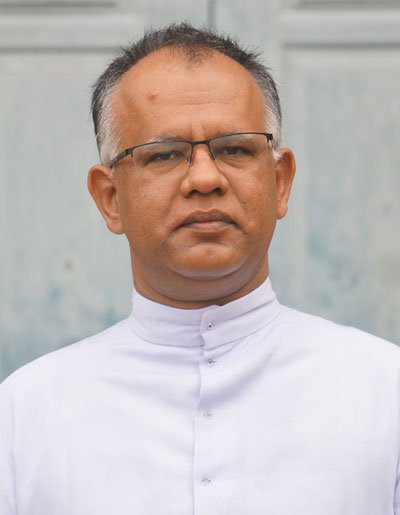 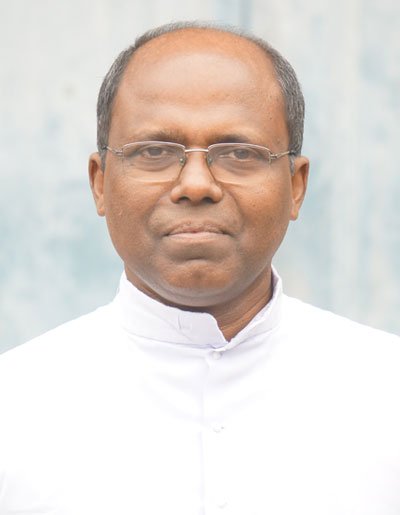 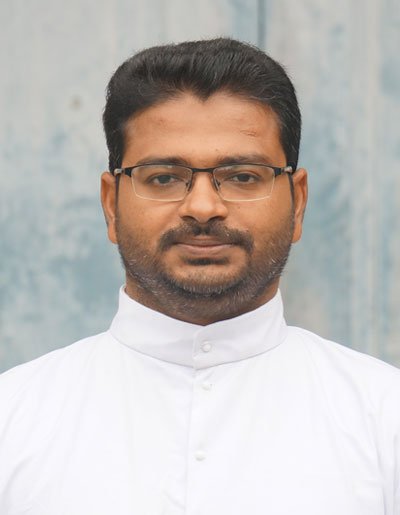 We envision to minister towards a world that walks in the light of the Lord by preparing men of knowledge, zeal and goodwill, and are firmly rooted in Christ and in the tradition of our Church, thereby forming priests who live out the biblical maxim – ‘LUX ET SAL’ – ‘Light and Salt’ of the earth.

Our mission is to form men in wisdom, knowledge and goodwill, with spiritual, intellectual and social maturity, deeply rooted in Christ, nourished in the tradition of the Syro-Malabar Church, to labour in the Lord’s vineyard, accompanied by compassion for the poor and zeal for souls and thereby faithfully fulfilling the mission entrusted by our Lord ‘PASCE OVES MEAS’ – ‘Feed My Sheep’.

The Globe and The Bible : Suggests the spreading missionary presence of the Syro-Malabar Church in the world.

Bread and Wine (Wheat and Grapes) : Recalls one of the fundamental roles of priesthood, namely Eucharistic celebration.

The Cross : The very symbol of salvation.

Lance : Represents St. Thomas the Apostle, the Father in Faith of the Syro-Malabar Church. (According to tradition, St. Thomas was martyred in Madras-Mylapur pierced by a lance).

The Branch in Blossom : The traditional symbol of St. Joseph, the heavenly Patron of the seminary.

Lux et Sal (Light and Salt) (Mt. 5:13-14) : Points to the mission of all Christians, especially of the priests, to be the light of the world and the salt of the earth.

Ryi Li Emarai (Feed my sheep) (Jn. 21:15) : These Syriac words remind the priests of their duty to follow in the footsteps of Jesus, the Good Shepherd.

The Star-studded Crown : Is the pleasing reminder of the Carmelite tradition of the Seminary.

Mangalapuzha chapel is an epic poem written on the campus of Mangalapuzha. The real originality of the chapel does not lie in the style but in the adaptation of the Gothic style to the climate and total environments so that it may convey a deeper and more comprehensive form of beauty and be worthy house dedicated to the worship of the Almighty. The Chapel has been, therefore, the blossom and fruit of intense artistic energy of several years and a short description of it we are giving here.

The Gothic style formed a natural development of the Renaissance style. The architects of a Gothic church wished to retain the vaulted ceiling but at the same time to do away with thick, solid walls, which had so little window space as to have the interior of the building dark and a gloomy. They solved this problem in first place, by using a great number of ribs, which rested on pillars and gathered up the weight of the ceiling. Ribbed vaulting made possible higher ceiling spanning wider areas than in Renaissance churches. In the second place the pillars supporting the ribs were themselves connected by means of flying buttresses with stout piers of masonry outside the wall of the church. These walls relieved from the pressure of the ceiling, now become a mere screen to keep out of the weather, they could be built of light materials and opened up with high, wide windows. 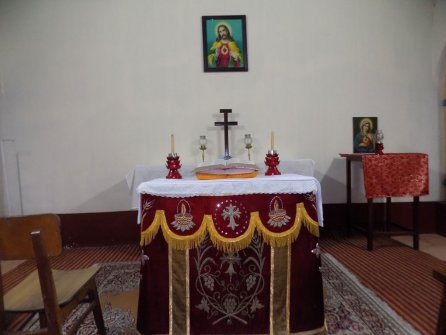 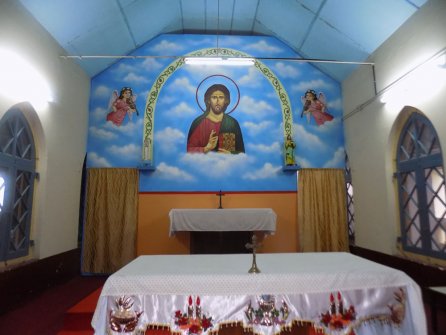 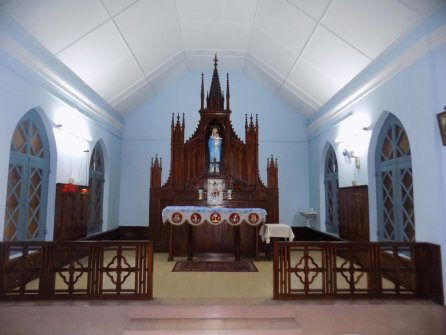 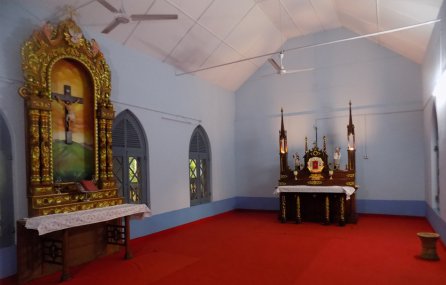 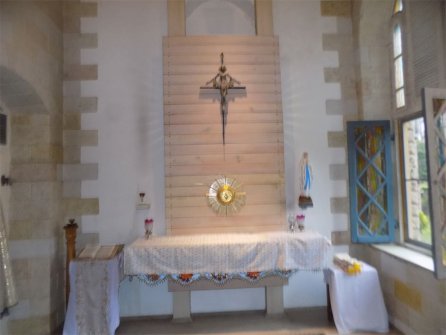 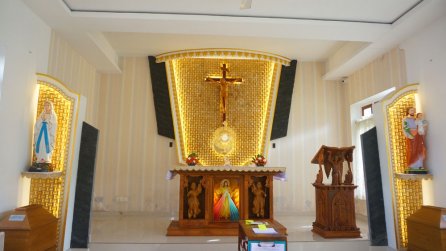 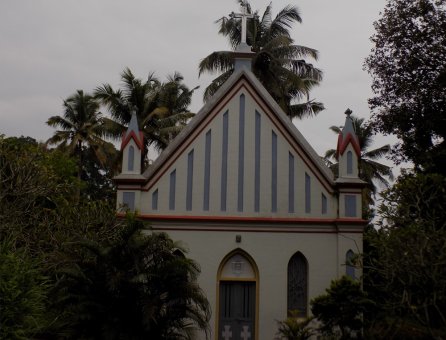 Looking from outside the Chapel has indeed a symmetric and majestic appearance as it is peculiar to a church of perfect classical Gothic style. This impression is enhanced by the towers, the complex Gothic architectural ornamentation. This impression is conveyed by the photo of the chapel. This external beauty of the Chapel is not executed in brick or cement, the usual material builders in this age of hurry, but it is all built in well shaped granite stones. Fortunately we have been able to get access to the quarries two miles away from the seminary were excellent stone of bluish colour is available. In spite of the external grandeur of the chapel, few realize that the voloume of the stone foundation buried in the ground exceeds that which stretches towards the skies. Beneath the apparent fragility of the construction there is a powerful framework of stone, an enduring and robust work supporting the slender and educate spires. It has been obsereved that is most pagan temples everything point to earth their massive structure as well as heavy ornamentation in contrast to the Gothic style churches where the vertical lines and the spires point to heaven.

Its interior is designed within the inspiration of classic Gothic, symbolic of man's most noble aspirations. The impressions produced by the slender columns, by the perfectly finished ribbed vaulting of the three naves and by the graceful triforium is one of yearning and striving for higher things. It fits here in all truth the expression of "a veritable prayer in stone". In fact the Gothic arch enables the architect to show bold initiative and makes possible the perfect flowering of Gothic vaulting and ornamentation. This idea is easily realized by merely contemplating the splendid ornamentation shown in the interior of the Chapel. It has been our aim throughout to mix usefulness with beauty—omne toilet punctum qui miscuit utile dulci.

The sanctuary and the main altar are all made of the whitest Carrara marble with carvings of different varieties of coloured marble.The marble of the sanctuary alone weighs about 24 tons, and the altar-marble of a single piece of marble weighs not less than 750 lbs. The tabernacle and the tronetto are made of very precious kinds of stones, while the columns, supporting the tronetto,is of genuine malaquita. The balustrade of the sanctuary is made of marble with columns with flowery carvings. The floor of the sanctuary is ornamented with emblems in eight different varieties of marble of gorgeous colours. All this great work was made in Rome by the Firm Messrs. Umberto Bruni and fitted in our locality by the Italian Engineer Sr. Mandolini sent by the above Firm from Rome.

Following the principles of Gothic style the Chapel is opened with a series of large artistic windows. Some people like dark churches, which they consider as conducive to mediation. But Indians in general and our Seminarists in particular love bright churches. Our purpose was to have a bright sanctuary; therefore, we have allowed in our Chapel abundant space for windows, specially in the sanctuary so that they may let in policrome light to light up the splendour of our religious functions. The windows of the sanctuary are of stained glass of superior grade made in London by the Firm Messrs. Goddard Gibbs, the same house that is making stained glass windows for the English Parliament Building and for the Canterbury Cathedral. The pictures in the stained glasses represent the subject appropriate to the training of students for priesthood; St. Thomas Aquinas, patron of Philosophers and Theologians; St.Alphonsus Liguori, patron of Moralists; St. John of the cross, Doctor of Mystic Theology; and St. JohnVianney,patron of the parish priests. The missionary side of the Seminary, wherefrom priests have gone to all the missions of India, has not been forgotten since two altars in the new chapel have been dedicated, one to St. Francis Xavier and the other to St. Therese of the Infant Jesus, both patrons of the mission. The spacious and artistic Choir is furnished with the latest model of "Church Model Hammond Electric Organ" equipped with two-tone cabinets and fitted with the reverberation control unit. Our Chapel could not be denied the glorious reverent music which means so much to enhance the beauty and solemnity of the Seminary religious functions. In fact the new organ provides rich and majestic tones, which leave nothing to be desired for different solemn functions.

The lighting is done according to the plans worked with the help of expert architects and electricians and fittings were specially done by the G.B.C. to match the Gothic pillars. The sanctuary lamp as well as the central big lamp are the manterpieces of a band-made craftsmanship and both are the work of a Spanish Salesian Brother. It is an example of Medieval lamp in wrought and beaten bronze embellished with silver, crystal and coloured enamel. Our Chapel, in matter of paintings, shows the greatest simplicity possible. No canvas or frescoes have been used except in the sanctuary. The only painting work has been in lining the Gothic ornamentation to enhance its beauty. Still the sanctuary is decorated with paintings of the famous Italian artist Mario Barberies whose paintings are remarkable for their originity and colouring. The paintings represent subjects, which may help the sacerdotal and missionary formation of the Seminarists such as the representations of the holy "Ordinations", the Harvest is great etc. There are also pictures of the chief saints of the Christian calendar which can serve as inspiration and model to our seminarists. After going through all the details of the external as well as the internal beauty of the Chapel most visitors are of opinion that it can be considered as a real gem of gothic architecture and perhaps as the finest church existing now in India.